Why you should choose Cantilever Racking Systems? 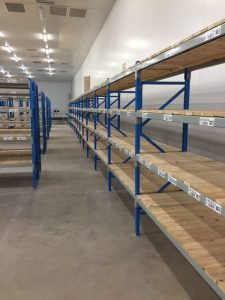 Are you in an industry that requires long, heavy items to be stored? If so, then cantilever racking systems may be the perect option for you.

Cantilever racking systems are constructed using a series of single columns that include outstretched arms and durable bases. The bases are meant to create a sort of shelving system for long, bulky or awkwardly shaped items that can easily be loaded. One of the best aspects of the arms of cantilever racks is that they are adjustable to different levels, providing you with the ability to store various product sizes.

On the other hand, traditional pallet racking has horizontal restrictions, whereas cantilever racking systems do not. This implies that there are no horizontal beams that get in the way during loading and unloading of your goods and equipment. What makes cantilever great as a storage system, especially for items of varying lengths, weights and widths, is that its entire length can be used.

Also, another aspect of cantilever racking systems that make them superior to traditional pallet racks is the lack of vertical and horizontal restrictions. You don’t have to worry about damaging your products during storing, loading or unloading. Cantilever racks are designed to be open and flexible, which decreases the incidence of damaged goods.

Ultimately, these racking systems can be utilized both in and outdoors. Depending on where you use the racks, the structure can be composed of galvanized steel for weather resistance.

There are two types of cantilever racks. Depending on your industry, either option may be a better fit for you. Either way, each of these systems is designed with heavy-duty material, are sturdy and meant to hold large and elongated products.

– Designed to store a variety of products and equipment

– No interference from upright columns

– Made from structural steel I-Beams

– Arms are connected to columns using a solid 4-bolt attachment

– Made for medium to heavy-duty loads

Whatsapp Facebook Linkedin
We use cookies on our website to give you the most relevant experience by remembering your preferences and repeat visits. By clicking “Accept All”, you consent to the use of ALL the cookies. However, you may visit "Cookie Settings" to provide a controlled consent.
Cookie SettingsAccept All
Manage consent

This website uses cookies to improve your experience while you navigate through the website. Out of these, the cookies that are categorized as necessary are stored on your browser as they are essential for the working of basic functionalities of the website. We also use third-party cookies that help us analyze and understand how you use this website. These cookies will be stored in your browser only with your consent. You also have the option to opt-out of these cookies. But opting out of some of these cookies may affect your browsing experience.
Necessary Always Enabled
Necessary cookies are absolutely essential for the website to function properly. This category only includes cookies that ensures basic functionalities and security features of the website. These cookies do not store any personal information.
Non-necessary
Any cookies that may not be particularly necessary for the website to function and is used specifically to collect user personal data via analytics, ads, other embedded contents are termed as non-necessary cookies. It is mandatory to procure user consent prior to running these cookies on your website.
SAVE & ACCEPT